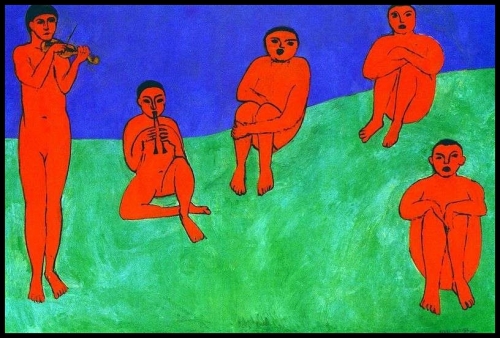 One example is “Impression III: Concert”, one ofKandinsky's most famous paintings. Here the painter wanted to convey hisemotions and impressions after attending a concert by the Austrian composerArnold Schönberg on 2 January 1911. The Russian artist was particularly struckby the rapturous music he heard at this concert held in Munich; through thiswork and others he created, the painter aimed to convey the great bond betweenmusic and painting.

To understand how much music inspired this pioneer ofabstractionism, one only need to look at the terms he used to describe and namehis works: composition, impression, improvisation, etc.

Intersecting music and painting was a natural processfor Paul Klee, an artist who had a background as a violinist. In his works,Klee often conveyed the energy of what he listened to. We are talking above allabout classical music, about Bach, a composer he also paid homage to in hisfamous work entitled 'Polyphony'.

Matisse and Mondrian: two lovers of classicalmusic and jazz who brought music to the canvas

Matisse was a lover of classical music but also ofjazz. He often gave concerts of Beethoven and Mozart at his home, especiallyduring the winter period, while the harmony and purity of Bach inspired him inhis painting. "Music" or "The Dance" are some of hispaintings inspired by Bach's works.

Piet Mondrian was a painter who appreciated jazz music,especially in his later years. Arriving in New York to escape the war, at theage of 79 Mondrian was still continually excited by music and was an admirer ofNew York nightlife, as well as a frequent visitor to a club called Minton'sPlayhouse. But Mondrian also liked the most frenetic boogie-woogie and he alsodedicated a work to this genre, one of the last by this extraordinary painter.That is "Victory Boogie-Woogie", a painting that unfortunatelyremained unfinished in which the artist, through the asymmetrical distributionof blocks, yellow lines and small coloured touches, conveys rhythm andliveliness, aspects that characterize this musical genre, but also the night ofNew York with its thousand lights.