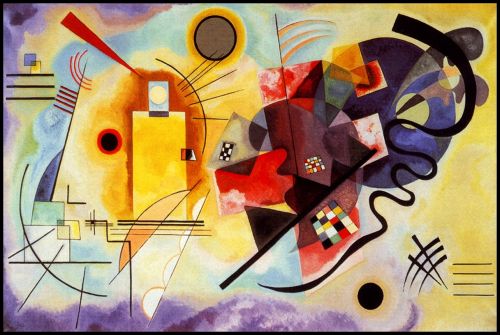 The desire to represent reality in a different and original way, far from the conventional rules, was the basis of the birth of Abstractionism; the founders of the various currents of Abstract Art, in order to assert themselves and transmit their vision, had to face the criticism of the traditionalists. Today, thanks to artists such as Mondrian, Pollock, Delaunay, Paul Klee and Malevič, artists from all over the world can express themselves freely and in a thousand different ways.

Here are three paintings that have marked the history of Abstract Art:

Kandinsky is definitely one of the pioneers of 20th century Abstract Art. The work was realized in 1925, when the painter was already well known. For about 40 years he had been travelling around the world and had finally found his definitive style, a language of his own.

Now preserved at the Georges Pompidou Centre in Paris, the painting is an imposing oil on canvas (127 x 200 cm.) in which several geometric figures contrast with serpentines and curves, while colours fill the surface of the painting.

Always intent on depicting above all the invisible reality and not the visible one, Paul Klee was well known especially when he found his own style, very personal and far from the influences of the exponents of the Jugendstill and the Expressionists.

The artist was also inspired by his great friend Kandinsky, as well as by his closeness to Cubism, aspects that can be seen in the painting "Red Balloon". Housed at the Guggenheim Museum in New York, it is an oil canvas mounted on cardboard, characteristics that denote the painter's desire not to be associated with any artistic current.

In the painting you can see several geometric figures that recall geometric abstraction and a certain cubist influence, while the choice of colours seems to indicate that there is also a certain warm soul in the painting, a peculiarity that he had appreciated and learned to dominate during his time in Tunisia.

Composition II with red, yellow and blue by Piet Mondrian

When it comes to abstractionism, it is impossible not to mention Piet Mondrian, co-founder of Neoplasticism. His continuous search for perfection, universal balance and his pictorial choices influenced by geometric abstraction and other artistic currents of the time are now imitated in every field.

For the Dutch painter, year 1930 meant reaching a goal, finding the balance he was looking for, a cleanliness in his paintings that reflected the understanding of reality in a deep way and not only based on the senses.

The canvas is essential, the colours used are three and all primary, while the forms are simple and often left bare; you can see a certain balance created through the use of yellow, red and blue to fill rectangles and squares separated by thick and precise black lines.

It is thanks to his approach to theosophy that the Flemish painter manages to find what for him is the universal balance, a sort of perfection that can be perceived very well when looking at the painting.