"The Stroll" by Claude Monet 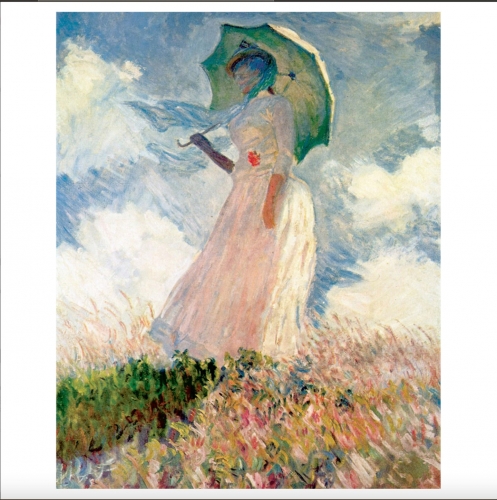 Realized during the summer of 1875, Claude Monet's painting entitled "The Stroll", also known as "Woman with a Parasol" is one of the most important masterpieces by the French painter.

Preserved at the National Gallery in Washington, this famous canvas, painted by the Impressionist artist, depicts Camille, Monet's wife, together with their son Jean.

"The Stroll" by Claude Monet: analysis of the work

The painting "The Stroll" was made by the artist during the stay of the Monet family in Argenteuil. Precisely, Claude wanted to immortalize one of the walks that his wife took with their son during the hot summer days in the hills of Argenteuil.

The presence of an umbrella in Camille's hands and a little hat on Jean's head are suggesting that day was particularly hot and therefore a shelter from the rays of the sun was essential; moreover, to confirm that it was a hot day there are also the colours chosen by Monet to represent the two subjects and the surrounding environment.

The woman has her bust slightly turned to the left and her gaze downwards, perhaps because in that moment Monet was at the bottom, on her left. Her son Jean, on the other hand, has a serious, almost apathetic expression and he looks elsewhere, as if he were observing something or someone present on the other side.

Although the Monet family was happy at the time, Camille's gaze reveals a veil of melancholy.

The choice of colours and painting technique

"The Stroll" is a clear, well-defined picture that allows the observer to identify with the characters and immerse himself in that environment in Argenteuil. The choice of colours used by the painter gives harmony to the painting, while the shape given by the brushstrokes gives "movement" to the image. The grass is moved, Camille's dress is swaying, and these gentle but distinguishable brushstrokes make us understand that during that hot summer day, on the hills of Argenteuil there was also a pleasant breeze.

Lively but at the same time delicate, Monet's painting "The Stroll" is only one of the masterpieces made by the painter during his stay in Argenteuil.

The other versions of the painting "The Stroll"

In fact, Claude Monet has produced not only one version of the painting "The Stroll", which is kept at the National Gallery in Washington. About 10 years after painting the first work, the French artist created two more versions, but this time the colours appear warmer, which underlines the fact that this time the paintings were made at different times, probably in the late afternoon. Not only that, in these two later painted versions the subjects change: instead of Camille and Jean there is Suzanne (the painter's second wife) and the latter's son.