The Scream by Munch 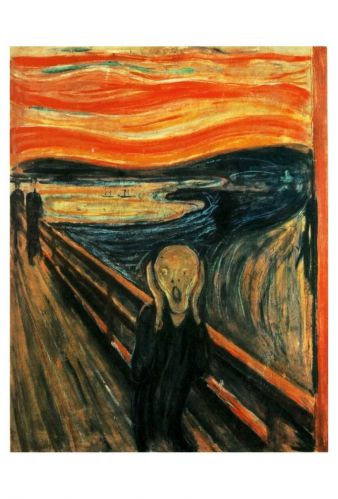 There are many paintings that have had great universal success, but among those that can perfectly represent the existential drama of modern men "The Scream by Munch" is considered the best.

Realized around the year 1893, the painting by the artist Edvard Munch was born while the painter was travelling around Europe and according to the hypotheses considered as the most probable, in the painting the subject represents the artist himself; according to other critics, the figure in the painting has actually been made unrecognizable (it is not clear if it is a man or a woman) because it represents man in general, humanity, with all its experiences from birth to death.

Loneliness, obsession, despair and loss is what emerges from Munch's Scream, a very instinctive reaction of man to fear and pain, terror and suffering that he has within him and that he expresses through this cry.

Wavy lines in the entire painting, exaggerated and unrealistic colours that distort the surrounding nature and unnatural shapes represent the experience of Edvard Munch while he was with his friends, associated in reality with a panic attack suffered by the artist.

In fact, since his birth Edvard Munch knew the suffering, losing his beloved mother at an early age first, then his sister whom he loved so much and finally also his father and brother, while the only sister left alive suffered from a mental illness. The painter himself soon began to face various neurosis and moody states of mind that have pursued him until the end of his days.

His works often show the suffering he had inside, his inner torments and his continuous struggle, but The Scream is the highest expression of the artist in which you clearly see the terror, confusion and general emotions of the artist and beyond. As he himself said, the painting represents the whole condition of modern man: anguish, loneliness, incommunicability, etc.

In the following years Munch "improves" and transforms his art, moving towards a style that provides more accentuated lines and colours; in the following twenty years the artist reaches international fame.

In 1916, after having managed to win at least part of his battles against the neurosis that had accompanied him for a long time, Edvard Munch decided to go to Norway and settled in his country house that he owned in Ekely, where he lived and worked until his death in 1944, in complete isolation.