The "Portrait of Dr. Gachet" by Vincent van Gogh 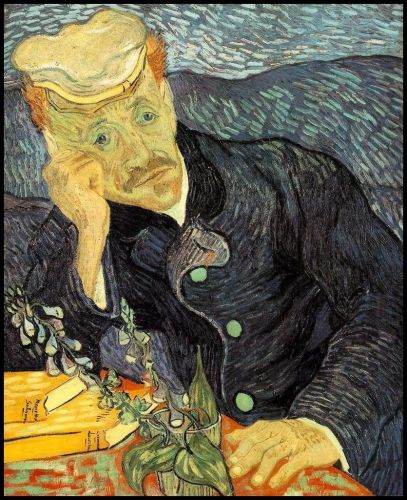 Born in 1853 and deceased in 1890, Vincent van Gogh is today considered one of the greatest painters ever. Although he did not have a very long life, during his lifetime Van Gogh produced about 864 canvases, works that were little appreciated while the artist was alive, but which today are invaluable.

Among his most important works, there is the "Portrait of Dr. Gachet", a painting that today is worth about one hundred million dollars and is currently part of a private collection.

"Portrait of Dr. Gachet", history and style of the painting

The figure represented in Vincent van Gogh's painting is a psychiatrist who loved art. The meeting between Van Gogh and the psychiatrist took place through the painter's brother, Theo. From the very beginning, the two of them were in harmony and the doctor agreed to be portrayed by the artist, so this painting was born.

Not only that, Dr Gachet was so happy with the final result that he wanted another copy, a work made by Van Gogh immediately after finishing the first version and which can now be admired at the Musée d'Orsay in Paris.

Unlike the other paintings made by Van Gogh, the "Portrait of Dr. Gachet" no longer has conventional features and static poses. Observing the painting one can see the figure of the psychiatrist who is sitting in a crooked position and has a melancholy, almost sad expression and later, in a letter he had written to his great friend Paul Gauguin, Vincent said that the doctor was "the disillusioned expression of our time".

It is remarkable also the chromatic contrast that can be seen in this painting: on the table, in the foreground there is a plant, while the brushstrokes are stretched from different angles and are perfectly matched together, emphasising different details and giving importance to different objects.

As mentioned earlier, it seems that Dr Gachet particularly liked this painting by the Dutch artist, and it seems that he also wanted another copy. While the current owners of the first painting are unknown, as it passed through several hands, the second copy was donated by Gachet's children to the Musée d'Orsay.

In this version of Vincent Van Gogh's painting, the books and the glass are not there, the background is blue, the colours are much brighter and the figure of the doctor and the plant is enhanced. In essence, there are several differences between the first copy and the second, differences that have led critics and scientists to formulate different hypotheses about these choices.

Especially the second "Portrait of Dr. Gachet" has been deeply studied by several scientists. Some critics claim that this second version of the painting was not actually made by Van Gogh, but directly by the psychiatrist Gachet who loved this portrait very much and was an amateur painter. Obviously, as it often happens when such theses are formulated, we do not know if those who believe that it is a painting made by Van Gogh are right or if the scientists who attribute the second version to the doctor are right.