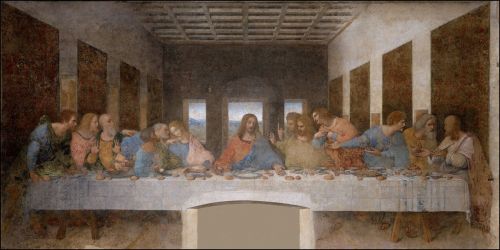 There are some works of art that remain in the heart of their observer and among the most beautiful of all there is also The Last Supper, a masterpiece created by Leonardo. Some interesting information about this work:

Where you can see the Last Supper

The Last Supper is a work created by Leonardo da Vinci between 1495 and 1498. It is a masterpiece that was commissioned to the Florentine artist to decorate the refectory of the convent of Santa Maria delle Grazie in Milan, where the work is still preserved today.

We are talking about a work that, together with the Mona Lisa, has marked the history of art, but this is not the only work by Leonardo made during his stay in Milan. Ludovico il Moro had commissioned the artist many other works, less famous than The Last Supper, but just as beautiful.

The reason why this church was chosen

The church of Santa Maria delle Grazie in Milan was the seat of the Dominican order as well as the place where Ludovico il Moro celebrated his family, the Sforza family. In 1494 the renovation of the church was ordered, and Leonardo was one of the artists who contributed to the beautification of the interior. As mentioned earlier, he was responsible for the decoration of the refectory and he had chosen The Last Supper as the theme.

Special features of the work

There are many artists who painted the Last Supper, but Leonardo's version is definitely one of the most beautiful and profound. Through this work, the artist has succeeded in making the various subjects "alive", he has endowed each apostle with a different characteristic, as if he wanted to give feelings to the drawings. The posture, the gestures and the choice of colours transmit depth, each subject seems to have feelings: wonder, anger, sadness, etc.

This is not a fresco

Exactly, the Last Supper is not a fresco. Although he had 9 meters wide and 4.5 meters high at his disposal, instead of choosing the fresco technique as it was used at the time for this type of size, Leonardo da Vinci painted the work as if he had a canvas in front of him.

The Florentine master was known for his slowness and his search for perfection and probably this choice was also due to these characteristics. Rather than opting for the fresco technique, he preferred to apply the colour using a new technique that involved applying in a mixed, dry style.

The execution was perfect, but unfortunately, given the humidity in the room, the work was fragile and already after a few years it required the first maintenance; restorations are also carried out in our times.

The mysteries surrounding this work

It is known that when the name of Leonardo is involved, mysteries are never lacking and even in this case the work in question is not without them, perhaps also because of its extreme fragility.

As we have anticipated, this work has undergone numerous interventions and the last restoration lasted almost 20 years. Following these interventions, some critics have claimed that the work has been modified. For example, the colour of the hair of some apostles has become much darker, in some cases the lips have been closed, etc. Basically, it is no longer known with certainty what the real characteristics of this work were initially.