The influences of Art Nouveau on architecture, painting and design 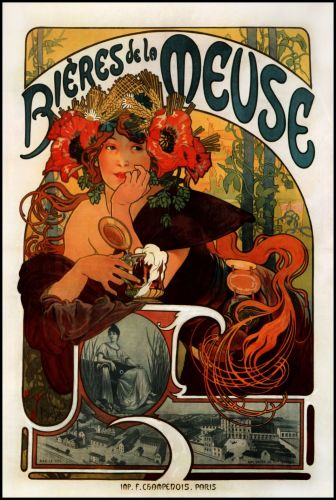 In Italy it is also known as Liberty Style, in fact Art Nouveau is an artistic movement that has strongly influenced architecture, design and painting at the end of the 19th century.

Art Nouveau (New Art) is an artistic-philosophical movement born in France between the end of the 19th and the beginning of the 20th century. The movement has expanded rapidly throughout Europe, taking different names and characteristics in various countries.  We are in the era of progress, balloon trips, romance and elegance, in fact the architecture of this era, as well as the paintings and sculptures made during this period are characterized by a very strong decorative elegance, by sinuous and sweet lines that harmoniously intertwine.

The Liberty Style is mainly inspired by nature and for this reason it is also known as "Floral Style". Branches, flowers and other natural elements are the symbols of this elegant and charming style.

In this period literature is also characterized by a romantic, dreamy vein, which rejects realism and any form of scientific thought to leave room for a crazy, dreamlike vision.

During the period in which Art Nouveau was becoming more and more popular, the artists who had approached this movement were carrying forward the ideas and actions that were at the basis of the birth of this current: the rejection of mass production of objects that began to be more and more common towards the end of the 19th century and the modification, the embellishment of products through an elegant, modern technique capable of giving a unique look to each object.

Although Art Nouveau artists did not like mass production at all, they were among the first to make themselves available to produce advertising posters and posters of all kinds, works that today are considered true works of art.

The most important Art Nouveau masterpieces

Architects, painters and engravers were inspired by the rules of this artistic movement to create masterpieces of all kinds. For example, the signs and posters made by Théophile Alexandre Steinlen are famous. Among his masterpieces we remember the sign of the local "Le Chat Noir" in Montmartre, while in Italy among the most beautiful posters we find the poster of the first universal exhibition in Turin in 1902. Also, the posters of Alphonse Mucha are unforgettable, including the advertising poster for Lefèvre-Utile biscuits, while on an architectural level we have the buildings made by Antoni Gaudi such as the Casa Batlló in Barcelona.

In Italy as well you can admire many houses built in Art Nouveau style, especially on the Riviera Romagnola, where wealthy families had beautiful villas built to spend their holidays.

The major exponents of Art Nouveau

There are many artists, philosophers, architects and writers in Europe and beyond who have embraced the Art Nouveau style. In addition to Alphonse Mucha, Théophile-Alexandre Steinlen and Antoni Gaudì, among the leading exponents of this artistic movement there are also the Italian architect Pietro Fenoglio, the painter Gustav Klimt, the architect Hector Guimard, Jan Toorop and Aubrey Beardsley.