The "Haystacks" by Claude Monet 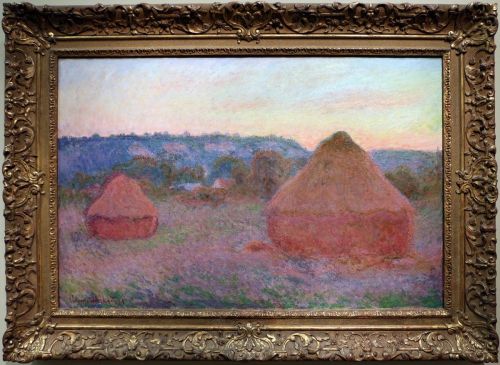 "Haystacks" are a series of paintings made by Claude Monet, now preserved in museums all over the world and belonging to private collections. As you can guess, the main subject of these works are the sheaves of hay and this series is undoubtedly one of the most appreciated among those made by Monet.

Today it is estimated that the series "The Haystacks" is composed of 25 themed paintings, works preserved all over the world and which were made in Giverny, a place where the impressionist artist has spent 40 years of his life, precisely until his death. During this period, the artist has painted practically everything close to his home, finding inspiration in nature, in everything around him.

Claude Monet loved Giverny as this place gave him so much inspiration thanks to its wonderful views and he painted what was around him in every season. The sheaves of hay are part of the surrounding landscape and Monet decided to paint them. It is known that Monet loved to analyse the colours that changed during the day, the shades that characterise each season and in this regard the sheaves that were always present around his house represented the perfect subject.

He examined the sheaves carefully, studied, drew and observed them from different angles, changing colours according to the weather conditions, to the time he drew them and to the season.

Initially the artist intended to paint only two canvases with haystacks as their subject: one that portrayed them on a sunny day and one on a cloudy one. However, as soon as he started to make these paintings, he realized that only two paintings were not enough because the light changed continuously and consequently, he started to paint more canvases in which colours and shades changed.

The impressionist artist started painting the first image belonging to the "Haystacks" series in 1884, but the most famous and majestic canvases in which the sheaves of wheat are represented date back to 1889 and 1891. These paintings differ from each other in their chosen colours and also in their pictorial preferences. In fact, in some paintings belonging to this series we can also observe diagonal strips of light between the various shapes, an aspect not found in other works.

Delicate but intense and able to immerse the viewer in the environment represented, the paintings that are part of this series have an inestimable value today and some have been sold at auction even recently, in some cases even for more than 100 million dollars.

Famous all over the world and as valuable as the paintings that belong to the series in which the artist painted the water lilies of Giverny or the cathedral of Rouen, "The Haystacks" by Claude Monet show the attention that the painter paid to every detail and his immense love for nature, which is why he chose a small town like Giverny and not a big city like Paris to live.