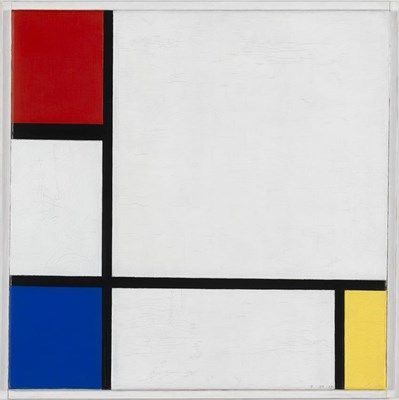 Pieter Cornelis Mondriaan, known worldwide as Piet Mondrian, was a Dutch painter and co-founder of "Neoplasticism". His paintings have often been trivialized and at the same time imitated, but in reality, his works denote a certain complexity and among his most famous paintings there is "Composition with red, yellow and blue".

Technical characteristics of the work

Like all the paintings made by Mondrian, the "Composition with red, yellow and blue" has inspired many designers and other professionals who still offer works based on the theories and style of the Dutch painter.

The painting "Composition with Red, Yellow and Blue" was created in the period between the two world wars, the years in which the painter defined his style.

Precisely we are talking about a work made in 1929, today kept at the Amsterdam Stedelijk Museum. The canvas is painted in oil and it measures 52 x 51.5 cm.

Always in search of perfection, Piet Mondrian has spent years searching for his style and defining it completely. It was between the two world wars that the painter created this picture characterized by black lines of a particular thickness, orthogonal lines that give life to square and rectangular backgrounds. If you look at the picture, you can see that the painter did not create a geometric centre and the various fields, clearly cut, could continue indefinitely, even outside the canvas.

The choice of colours

In this work the painter is searching for a chromatic and formal balance, that is to say a universal balance, and the colours are arranged in such a way as to suggest that the artist has found what he is looking for.

In fact, it can be seen how the large white square at the top, on the right, is balanced by the colours used in the opposite corners, giving rise to a perfectly balanced painting both in form and colour.

The choice to use only primary colours is to be connected to a precise spiritual symbolism, in which red represents the link between space and light, yellow is pure solar energy, while blue is the symbolic colour of spirituality.

Very close to a spiritual discipline called Theosophy, the Dutch artist reported the theories of his passion also in his paintings, which often reflected the principles of this doctrine.

The composition of the work

After years in which he tried to find the perfect balance, after various paintings and drawings that gradually became more and more essential and sometimes completely devoid of colour, Piet Mondrian found his universal balance, which for him also symbolized a correct life.

So, he began to create perfectly balanced compositions, characterized by horizontal and vertical lines that formed backgrounds with a harmonic dimension. In addition, to give a sense of complete balance he distributed the colours in such a way as to perfectly weigh the composition, varying his choices according to the geometric shapes obtained.