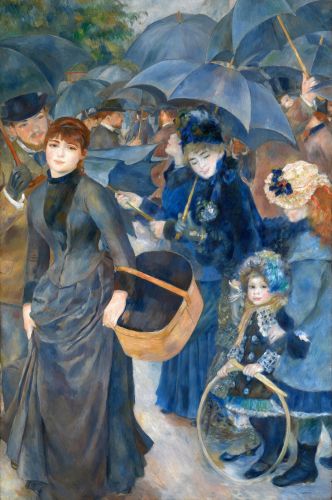 An icon of Impressionism, Pierre Auguste Renoir has created works that are a hymn to optimism. Together with his impressionist colleagues he shared the difficulties that this current had to face in order to assert itself on the artistic scene, so he also experienced the misery that characterized a part of the life of every impressionist, as well as the evenings inside the Parisian inns.

Born in 1841, Pierre Auguste Renoir represents in his works the bohemian life he loves so much, also made of sexual promiscuity, alcohol abuse and often even drugs.

As a child Pierre Auguste Renoir shows a strong talent and interest in art and with the help of his father, he begins his career, painting porcelain, while at 21 he joins the Ecole des Beaux-Arts where he becomes friends with Alfred Sisley, Claude Monet and Frédéric Bazille. Together they decide to abandon painting in the studio and devote themselves to open-air painting, as to capture the true essence of colour and light.

Together, Monet and Renoir often paint the same landscape in the open air and then they compare them, while on 15 April 1874, Pierre Auguste is among the artists who exhibit at the gallery of the photographer Nadar; this date and this exhibition officially mark the birth of Impressionism.

Like most Impressionists, Pierre Auguste Renoir also goes through a period of economic hardship, but his joy of life never wanes. After several relationships, he eventually marries one of his models: Aline Victorine Charigot, a woman he has met in 1880 and with whom he has three children. Aline is portrayed by Renoir on several occasions, but the most famous portrait in which his wife is present is called "Luncheon of the Boating Party", where Aline is holding a little dog.

During his life, even after marrying Aline, Pierre Auguste Renoir has many lovers and continues to paint, a passion for painting that he does not abandon even when he is old, in a wheelchair and struck by rheumatoid arthritis. In fact, it seems that the painting "The Bathers", made when he is seriously ill, is made by the artist after he has his brush tied to his wrist, because he no longer has a steady hand.

During his life, Pierre Auguste Renoir has made more than 1000 paintings and some of them are very famous: "On the terrace", "La Parisienne", "A girl with a watering can", "Dance in the country", "By the seashore", "Girls at the piano", "The theatre box", "Pink and blue", etc.

Rich in female subjects, Pierre Auguste Renoir's paintings are often sold at auction for millions of dollars and while some paintings are kept in the most important museums all over the world, others are part of private collections.

A playful atmosphere, jaunty attitudes and scenarios of everyday life full of carefree moments are among the characteristics in the paintings of Pierre Auguste Renoir, a true master of Impressionism.