Life and works of Katsushika Hokusai 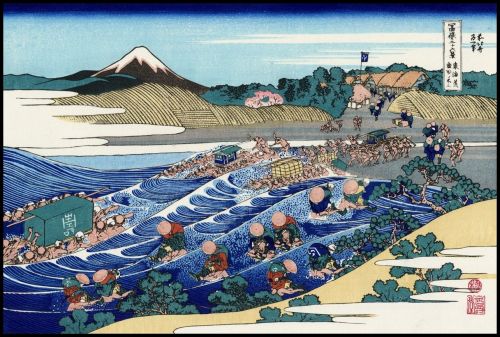 Katsushika Sori, alias Katsushika Hokusai (1760-1849) was one of the most important Japanese artists. Painter and xylographer, Hokusai started painting at the age of 6 and among his best-known works there is "The Great Wave of Kanagawa", a work full of bright colours.

The style of Katsushika Hokusai inspired Degas, Toulouse-Lautrec, Gauguin, Van Gogh and many other European artists.

The Japanese artist's training began when he was 14 years old and Katsukawa Shunsho was one of his first teachers, a xylographer who taught him the "Ukiyo-e" style. This style was very much in vogue in the Japanese bourgeois circles at the time (19th century) and Ukiyo-e prints were mainly used to decorate the interiors of houses.

The well-defined contours, the absence of depth, the subjects represented (scenes of everyday life, animals, wrestlers, courtesans, birds, etc.) and the particular colour combinations were the main features of this style.

The Japanese artist stayed in the master's studio for 19 years, then in 1795 he joined the Tawaraya School where he enriched his technique even more. It was during this period that he created the bijin-ga images in which beautiful Japanese women were portrayed, often represented in sensual poses.

In 1798, when he was 38 years old, Hokusai opened his own workshop and there he began to make several personal works, including the series of 15 volumes Hokusai Manga in which you can see fantastic scenes mixed with images of everyday life.  This series is also considered as the basis of the "language of comics" because in the volumes you can see a series of images that seem to be executed to show the events of a certain period, the passage of time.

In 1820 the artist was well known, although his absolute masterpiece dates back to 1831, when he was seventy-one years old. We are talking about the series "Thirty-six Views of Mount Fuji" which also includes the work "The Great Wave of Kanagawa", one of the most important works of oriental art.

Katsushika Hokusai, an artist who inspired the European impressionists

The artistic style of the Japanese painter and xylographer inspired several European impressionists, especially Van Gogh and Gauguin who particularly admired Hokusai's choice of colours and the subjects the Japanese artist portrayed.

In Europe, Hokusai's works became famous in a rather bizarre way: his prints were used as postcards or to wrap precious objects that were sent from Japan.

Always striving to improve his style and to pursue artistic perfection, Hokusai worked until his death at the age of eighty-nine. It is said that he had the desire to live up to 130 years, so he could achieve absolute artistic perfection. In fact, he was convinced that art improved as the years went by and he believed that no work he had made before his 70th birthday had any value.

Today, numerous copies of his creations can be admired in various museums all over the world: the British Museum in London, the Metropolitan Museum of Art in New York, etc.