Klimt's "Portrait of a Lady" has been found 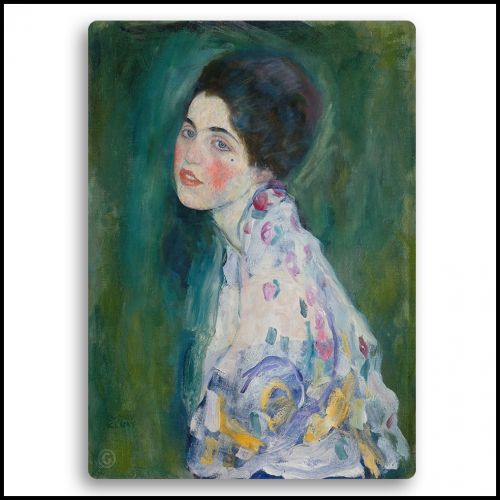 Surely someone still remembers the day when Gustav Klimt's "Portrait of a Lady" was stolen from the Ricci Oddi Gallery in Piacenza. It was February 6, 1997 when the art world was shocked by the theft of the famous painting by the Austrian artist.

The painting, made in the same period in which the artist had also created other female portraits, between 1916 and 1918, had disappeared from the Ricci Oddi Gallery in a completely mysterious way. Although investigations were started immediately, the dynamics of this subtraction inside the gallery remained obscure. In order to find the painting by Gustav Klimt, investigators followed many tracks, but none led anywhere. Every aspect was shrouded in mystery: how the thieves got in and escaped the security controls, who could have done it, and above all who had the painting. For some time the investigators also followed the satanic sects trail, a hypothesis then denied, then the confession of one of the alleged thieves suggested that "The portrait of a lady" had ended up in the hands of drug traffickers, but even this trail did not lead to the picture.

In 2014 the investigation was reopened, in 2017 even the Italian tv show "Chi l’ha visto" dealt with the matter, but once again there were no developments on the disappearance of this painting.

After 22 years in which no one has been able to explain the disappearance of the painting, there was a turning point that solved this mystery. While an ivy was being pruned on one of the walls of the Ricci Oddi Gallery, a trapdoor was noticed. Forcing the lock of this makeshift deposit, Gustav Klimt's painting was found inside a black bag.

It is not known who put it there, but the most plausible hypothesis is that the thieves put it in this hatch to go after and get it back. However, perhaps the thieves were deterred by the great media attention that was unleashed after the disappearance and so the sealed painting remained there all these years.

Later, the experts have confirmed the authenticity of the painting: it is "The Portrait of a Lady" by Gustav Klimt.

Unfortunately, the painting stolen from the Gallery in Piacenza is not the only work of the Austrian painter to have disappeared. In 1894 Gustav Klimt had also created "Medicine", a masterpiece that he had been commissioned to decorate the ceiling of the Great Hall of the University of Vienna. Considered "pornographic" and unsuitable for decorating the University Hall, the painting had been placed in a castle near Vienna, but during the Nazi retreat, on May 7, 1945, an SS team not only carried out a raid on the castle but also blew up the towers. A vast fire broke out for 4 days and there was no trace of the painting. It is therefore not known if it was stolen or if it burned in the fire and this is a mystery that has lasted for more than 70 years.