Joaquìn Sorolla, the painter who loved to paint light 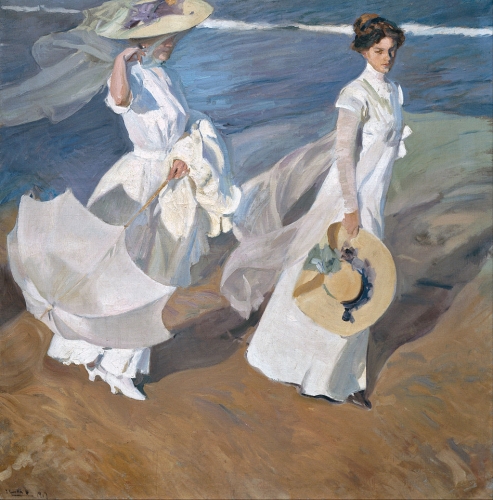 Born in Valencia into a family of humble origins on 27th February 1863, Joaquìn Sorolla is a Spanish painter. Painting is like breathing for him; he lost his parents before the age of two, but he always carried on his passion for drawing and painting, thanks also to his adoptive aunt and uncle who, despite not having great financial means at their disposal, always supported their nephew's passion.

While helping his uncle in the family workshop, Joaquìn attended evening drawing classes at the vocational school for craftsmen and at 15, with the help of his aunt and uncle, he began to devote himself entirely to art studies at the Academy of Fine Arts in San Carlo, where he also began his apprenticeship.

During his studies he met the owner of a photographic workshop, Antonio Garcia, who immediately understood Sorolla's talent and helped him to express himself through his work. Garcia took the young man 'under his wing', offered him a job and allowed him to paint in the workshop's attic. It was during this experience that Sorolla began to study light, an aspect that would become one of the main characteristics of his later works.

While continuing his studies, Joaquìn Sorolla began to participate in prize competitions and exhibitions. In 1881, he took part in an exhibition in Madrid and, although he was not noticed on this occasion, he learned several things and was deeply marked by the painting techniques of the time. In 1884, Sorolla participated in the National Exhibition in Madrid, where his patriotic painting '2 May 1908' won second place. Also in 1884, he won a provincial competition in Valencia and, with the scholarship he received, moved to Rome.

From Rome to Paris, discovering light

Once in Rome, Joaquìn Sorolla met Pedro Gil Moreno who advised him to move to Paris. In the French capital, Sorolla learnt other painting techniques and realised that his painting techniques were different from the requirements of the time. Furthermore, he realised that the studio was not suitable to create his works, but he had to move outdoors. Thanks to this illumination, he refined his technique centred on light.

Sorolla concentrated all his energies on painting, taking part in national and international competitions, broadening his knowledge and during this period he met José Jiménez Aranda and Aureliano de Beruete. The latter introduced him to high society and thanks to the numerous works commissioned to him, Sorolla solved his financial problems.

During this period, the artist became famous, his career reached its peak, but later the painter became closer and closer to the style of Velasquez, an artist whom Sorolla held in high esteem. From this point on, Joaquín Sorolla began to paint what he felt and saw, without feeling tied to conventional painting, and he produced masterpieces such as "My Daughter's Convalescence", "Children on the Beach" and other paintings that look like photographs because of their realistic appearance.

His fame continued to grow until his death on 10 August 1923, in Cercedilla, when the artist was 60 years old.