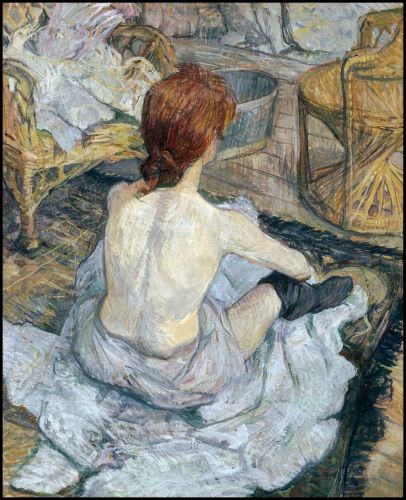 Henry de Toulouse-Lautrec is born on 24 November 1864 in Albi, in a noble family and since he is a child, he shows a great interest in painting, hunting and horses. Unfortunately, his life is marked by several genetic disorders, including dwarfism, diseases that are triggered mainly by the fact that the painter's parents are first cousins.

In 1872 Henry de Toulouse-Lautrec moves to Paris with his mother, where he studies at the Lycèe Fontanes. Here he meets Maurice Joyant, who becomes his best friend and who, at Henry’s death, also founds a museum dedicated to him.

Given his state of health and his stature, Henry de Toulouse-Lautrec immerses himself completely in his art and, strongly influenced by Manet, Van Gogh and other illustrious painters of the time, he moves to Montmartre where he establishes relationships with many painters.

Often referred to as "the soul of Montmartre", in his works Henry de Toulouse-Lautrec very often represents the life of Parisian clubs and the most famous theatres and he is often hired for his skill in advertising. Not only that, Henry also works as an illustrator for the magazines "L'estampe originale" and "La revue blanche", and he also collaborates with the magazine "Le Lire" which deals with satire.

He is a lover of the Japanese prints that inspires him and that have a great influence on his style, which is distinguished by the simplification of the lines and which consists in the application of the colour in a flat and homogeneous manner.

The dancers, the famous people who attend the bars, theatres and brothels, as well as the common people, are among the subjects most frequently found in the painter's works, which at first glance seem to be suddenly realized, but which in reality are carefully studied and prepared after long sessions of painting.

The first exhibitions are held in Montmartre and in the same period Henry also approaches the avant-garde defined as "Anarchists of Art", a movement formed by a group of illustrators and painters who create works in the name of humour and unconventionality.

In 1889 he also participates at the "Salon des Indépendents", an exhibition organized by artists excluded from the classic "Salon des Artistes français". At the same time, the artist also becomes interested in lithography and he exhibits for seven times, he also approaches the Nabis circle. Unfortunately, his vices, including alcoholism, and syphilis, which he takes while attending a Parisian brothel where he has been at home for a long time, are not habits that help the artist and on December 9, in 1901, when he is not yet 37 years old, Lautrec dies.

Talented, curious and always very active, Henri de Toulouse-Lautrec is one of the greatest bohemian painters and illustrators and his works are kept in the largest museums in the world: Musée d'Orsay, MoMA (Museum of Modern Art, New York), etc. Among his most important masterpieces: "Mademoiselle Églantine’s Troupe", "Rousse", "Ambassadeurs", "Le Lit" and "Divan Japonais", works that perfectly represent especially the Parisian night, much loved and lived by the artist, soul of Montmartre.