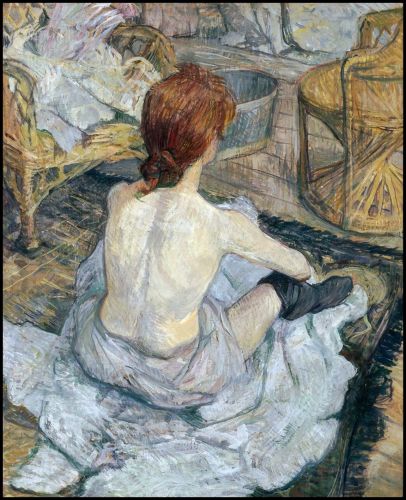 Born on 24 November 1864 in Albi, France, Henri de Toulouse-Lautrec was a famous painter and lithographer. Of aristocratic origins, Henri was an exponent of the Parisian Belle Époque. Although he suffered from a disease of the bones that had blocked the natural growth of his lower limbs and he did not live to old age, this extraordinary artist produced numerous masterpieces: about 737 paintings, 275 watercolours, 369 lithographs and even 5,000 drawings.

The subjects chosen by the artist belonged to different social classes: artists, nobles, athletes, writers, health personnel and even figures from Montmartre. In fact, several of his works show prostitutes, figures considered ideal models by the painter as he believed they were the most spontaneous in the movements.

His life as an illustrator has also been very full and there are many posters signed by Toulouse-Lautrec that have become famous.

Ironic, rebellious, able to portray in his works scenes of daily life of the poor and the rich, melancholic and spiteful, Henri de Toulouse-Lautrec is the classic artist who can be defined as complex.

While this painter and lithographer managed to be so versatile that he always seemed at ease both in noble salons and brothels and even though he was famous for having an open mind, his full life was also marked by many unpleasant moments. Apparently, the artist was very much burdened by the fact that his parents did not consider him a real artist but only a rebellious boy like many others of that time. Not only that, many of his fellow artists often belittled Henri's talent and work, while his love life was marked more by painful moments than by happy ones.

In one of these particularly painful periods Henri, tired of criticism, decided to do something that no one had dared to do before: to be photographed while defecating in public, as a protest and in response to those who belittled him as a man and an artist. This was inconceivable at the time, but Henri, with his rebellious spirit and the complicity of his dear photographer friend Maurice Joyant, decided to send a provocative message to all those who disgraced him. So, the two of them went to the beach and here the photographer took the first shots in history in which an artist committed such a grotesque gesture.

We are talking about a very dark period for the artist, a phase that marked his life, in which in addition to the problems he faced because of his bone disease he also had to face the discomforts caused by venereal diseases and alcoholism. Even on the economic side things were not better, in fact Henri later had to leave his home to go back to his parents. In his father's house he was not appreciated as an artist and an uncle even burned several canvases because they were considered vulgar.

The decline continued and a year after the beach stunt Henri de Toulouse-Lautrec was hospitalised in an asylum where he remained for three years, until 1901, when he died.