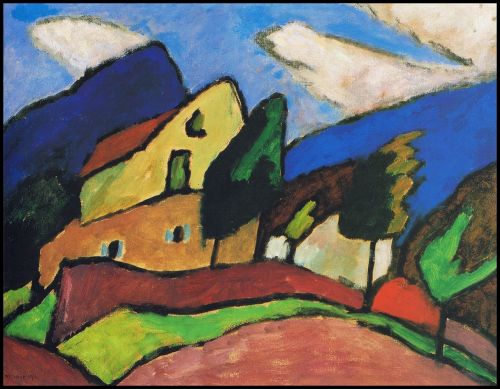 After leaving a brilliant career and a wife in Russia, Wassily Kandinsky moves to Berlin and it is here that he meets the young Gabriele, who is an aspiring painter born in a middle-class family in Berlin who, despite the times, never stops to encourage Gabriele's artistic career.

Their meeting and their tormented love

The love between the two is born between sketches, brushes, canvases and reprimands, as well as between two different styles that intertwine. But despite the love that unites them, Kandinsky cannot completely leave behind his past and life in Russia, especially he cannot put aside the guilt about his wife, left behind. In addition, the relationship with Gabriele is troubled, confusing and those 11 years of age difference certainly do not encourage it, indeed, they often manifest themselves by creating imbalances in the couple.

Rebellious, strong and at the same time fragile, Gabriele is a young woman considered by Kandinsky, not "tameable" even on an artistic level. In fact, he thinks he can't teach her anything, but he tries to protect her and make sure that the woman keeps her talent as it is, unique. The contrasts between the two often occur, but despite the many differences, the relationship between Wassily and Gabriele lasts for 12 years. He is always annoyed by her humour, while she suffers because she feels like the shadow of the painter, especially on an artistic level. In fact, for everyone she is the lady who accompanies the painter and the fact that she also paints is considered as a secondary thing, an attitude that annoys her very much.

The separation between the two lovers

Despite the ups and downs, their relationship goes on for 12 years, the two do not marry, she doesn't care if the union is recognized legally or by others, even when in 1911 Wassily Kandinsky obtains the separation from his wife. In fact, the fact that the man is married is never a problem for Gabriele, she doesn't want to bind herself to him in a legal way, she is rebellious, independent and wants to preserve her natural way of doing things.

Their hearts are in some ways incompatible and this leads to the definitive breakup in 1916, the year in which the decline of the woman begins. Following the separation Gabriele goes into depression, into a total crisis that even leads her to stop painting. Instead, it is different for Kandinsky who, less than a year after the separation, recreates a new life, marrying Nina Andreevskaja.

It was only around 1920 that the woman resumes her activity as a painter, dedicating herself to landscapes, as she had done before, and although she has never known an absolute glory, in 1956 the City of Munich gives her some awards. The artist dies at the age of 75, in 1962, in her house in Murnau, where she spends most of her life, especially after her separation from Wassily Kandinsky.