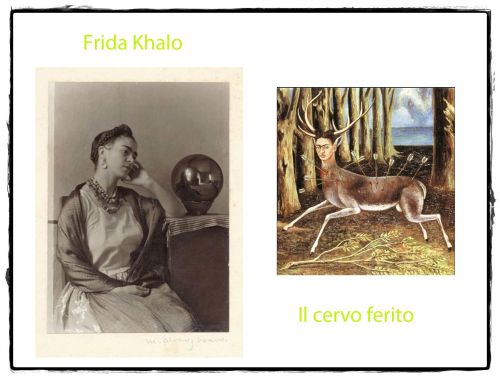 Since she was only six years old, Frida Kahlo has been experiencing suffering on her own skin, health problems that would have accompanied her throughout her life, but which have not prevented this woman from achieving her independence and success.

Born in Mexico in 1907, Frida Kahlo was suffering from spina bifida, mistaken at the time for polio and the physical pains she felt since the disorder began to appear were atrocious, especially for a six-year-old girl. At the same time, perhaps it was the illness that made the artist strong and passionate, as we can see from the life she led and from her works, which reflect a very strong temperament.

After attending high school, Frida wants to become a doctor and is admitted to the most important Mexican Higher Institute, where she also begins to approach politics, supporting socialist-nationalist ideas.

During her studies Frida Kahlo was bullied by her companions, but she never gave up, not even when on September 17, 1925 the bus on which she was travelling was involved in a terrible accident that would change Frida's life forever.

Her spine was broken in three points, her pelvis fractured, her ribs broken and a handrail that entered her abdomen and then left her vagina with permanent infertility were among the most serious consequences that the woman suffered at the age of 18, but despite having to undergo 32 surgical operations and being hospitalized for three months, Frida tries to react.

Back home, the artist had to stay still for more than 9 months, as she had to wear busts to remedy the fractures suffered by the lumbar vertebrae and it was in this period that Khalo began to paint. A mirror placed on the ceiling, an easel and some oil colours were her roommates and it is in these moments that she begins to make portraits of herself.

Afterwards, after removing the plaster, Frida begins to walk again and even if the atrocious pains will accompany her for the rest of her life, she reacts once again and tries to lead a normal life, as far as possible.

In 1928 she enrols in the Communist Party, attends her university friends and takes an active part in political life. At the same time, Frida Kahlo meets the one who would later become her husband, the painter Diego Riviera, but her love life was not better than her health condition.

Continuous betrayals of her husband (also with her sister) lead to separation, precisely in 1939, when the two spouses have already been living in the United States for a few years, after being forced to leave Mexico, since the Mexican Communist Party had become outlawed.

After a year Riviera, repentant of his behaviour, asks Frida to marry him again and the woman accepts. They return to live in Mexico and here the woman falls ill again. Back pains force her to wear a steel bust and this fact will lead the artist to paint one of his most famous paintings "The broken column".

Unfortunately for the woman there is no respite and her health conditions deteriorate further over the years and her right leg is amputated, while at just 47 years old, Frida Kahlo dies of a pulmonary embolism.

In practice, although cruel, Frida Kahlo's life has been very intense and has transformed her suffering into art, into unique masterpieces.