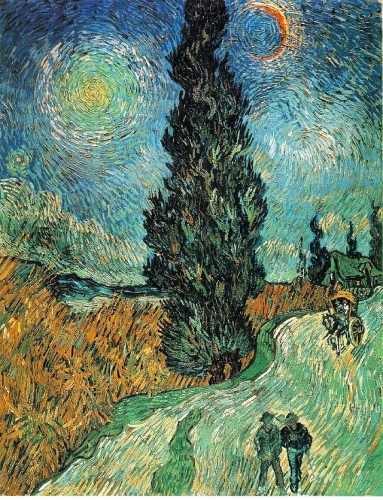 Also known as "Road with Cypresses and StarrySky", the painting " Country road in Provence by night" is a masterpiece by the Dutch artist Vincent van Gogh, created in 1890 and currently housed in the Kröller-Müller Museum in Otterlo, the Netherlands.

Particularly fascinated by the elements of nature such as the stars, the moon and landscapes, Vincent van Gogh was one of the post-Impressionists who left us priceless masterpieces, including the painting “Country Road in Provence by night”.

Description of the work

As the title suggests, the artist depicts a path through the fields of Provence. In the painting, two people can be seen walking along the path, as well as a small cart pulled by a horse carrying other people. In the background, on the right-hand side, there is a house next to a cypress forest and the landscape is divided by a cypress tree along the path. On the left, you can see yellowish patches of wheat at the top of its growth, which is very likely, given that the painting was created in May, while on the horizon we can see mountains surmounted by clouds. Finally, the moon and the stars give light to the whole painting.

Still studied by both astronomers and writers, it is a painting in which the sky is represented in a very precise manner, with two planets: Venus and Mercury. The 'Evening Star', Venus, is easily identifiable as the star above the clouds, while the experts identified Mercury thanks to the available data and they concluded that Mercury was indeed clearly visible when the painting was created.

In the painting, the brushstrokes are long and the various colours come together, creating numerous nuances, which is typical of Vincent van Gogh's style.

Meaning of the painting

According to some experts who have studied the canvas, when the artist painted this masterpiece, he was aware that he was nearing the end of his days, which is why he chose to represent the painting in this way. The crescent moon and Venus symbolize the old and the new, which are believed to be separated by the Obelisk of Death, the cypress tree, and the pair of pedestrians perhaps represent human life in the context of infinity and eternity.

It seems that the artist saw in the sky and the stars a kind of hope, a better universe than the earthly one, and in each painting in which he depicted the vault of heaven he took great care to depict perfectly what he saw before his eyes, painting every detail with the utmost meticulousness and avoiding adding stars or other elements that were not really present in the sky. It is thanks to this particularity that experts have been able to confirm the precise dates when several of the artist's paintings were made and to confirm or deny those previously attributed.