Caspar David Friedrich: one of the greatest exponents of Romantic Art 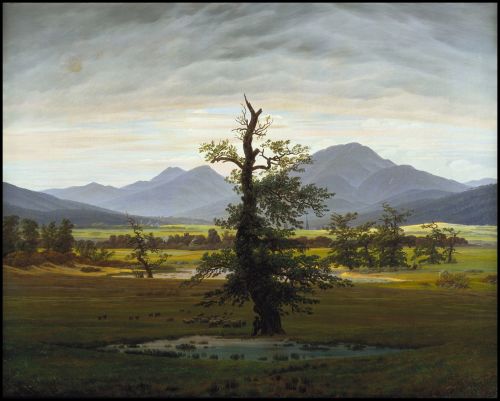 Born on 5th September 1774 in Greifswald, Germany, Caspar David Friedrich is one of the leading exponents of Romantic art. Thanks to his painting, the German artist unleashes his melancholy, his inner restlessness and his awareness of the presence of death in earthly things.

"Wanderer above the sea of fog" is one of the most famous works that come to mind when you think of this painter, a work that fully represents the inner state of the artist and his pictorial style based on careful observation of each landscape and the particular light that each landscape scenario offers.

In the landscapes Caspar David Friedrich saw divine works and he usually portrayed certain moments, such as storms, sunrise or sunset.

Unfortunately, the painter had to deal with death since an early age, as several deaths occurred in his family. Not only he lost his mother at an early age, but also two sisters and a brother, so he knows suffering and melancholy when he is still a child. But this is also the period when he begins to take drawing lessons and enjoys portraying parks and gardens, using watercolour.

He then moved to Berlin, where he stayed for a while, before settling in Dresden. In the meantime, he created several works and in 1809 he also finished "The Monk by the sea" and "The Abbey in the oakwood", paintings that were bought by Frederick William III of Prussia. A few months passed and on 18th September 1810 Caspar David Friedrich received a visit from Goethe, who was impressed by the beauty of the paintings he saw in his studio.

Although he had never taught, on 18th January 1824 Caspar David Friedrich was appointed lecturer at the Dresden Academy, but at the same time the artist began to show the first symptoms of a disease that was never definitively ascertained, but which was of paranoid-obsessive origin.

Although he was already ill, it was in this period that the painter produced some important works such as "The sea of ice", in which the seasons and the succession of days are completely annulled, since everything is enveloped in the eternity of the ice. Life in this painting is represented by the ship which, being imprisoned, has no chance of escaping eternity.

On 7th May 1840 the artist died and since then he rests in the Trinity Cemetery in Dresden.

The particularity of the painter's style

Looking at David Friedrich Caspar's paintings, we do not miss the almost maniacal attention that the artist has towards details. After the foreground there is immediately the background that is almost unreachable, far away and infinite.

Mystery, delicacy, man-nature relationship that at a certain point seems to turn into a single thing is what is represented in almost every painting made by this melancholy artist, pioneer and great representative of the German Romantic movement, an artistic current that begins to lose its fame when realism takes over, but that is later re-evaluated.