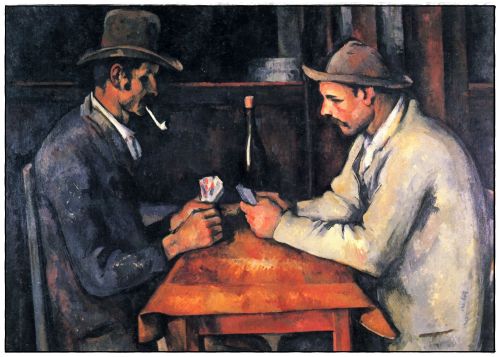 Made between 1890 and 1895, "Card Players" is one of the most famous paintings made by Paul Cézanne, a work that is kept at the Musée d'Orsay in Paris. It is a 47.5 x 57 cm canvas depicting two players playing cards in a room, inside a club, isolated from other customers. The two subjects are seated at a wooden table that also houses a bottle of wine closed with a cork. The two players are dressed in a simple but dignified way and around them you can see the decorations of the room, the wooden walls and even the glass of a door.

Paul Cézanne has not just created one painting on this theme, but 5 works that have as their subjects the card players and the version preserved at the Musée d'Orsay is the most sober in terms of colours, in which it is clear the research of the artist. Another work entitled with the same name belonged to the Le Nain brothers and there are those who claim that they were the ones who inspired the artist.

In the painting "Card Players" Paul Cézanne represented the figures by simplifying the forms. For example, the arms, the bust of the card player on the left, as well as his hat take on a cylindrical shape, while the table has a parallelepiped shape. Everything in the painting takes on an essential form, in fact you can see that the artist, after analysing the real forms, has focused on their simplification, so it is a masterpiece executed in a rational way and that is why it is one of the paintings that influenced the birth of Cubism.

The colours and lighting also underline this choice, and the chromatic approach of the painting, which is based on a perfect balance created by the skilful use of warm and cold colours, naturally enhances the figures and what surrounds them, while at the same time offering a certain stability to the image depicted, a clear temporal suspension.

The players have been painted in shades of green, blue and grey, while the faces, hands and surrounding environment include shades of pink, orange and brown, so the painting shows a contrast of complementarity between orange and blue that together with the brightness of the painting highlights both the players and other details in the painting.

A source of inspiration for many artists, the painting "Card Players" is one of the most expensive in the world.