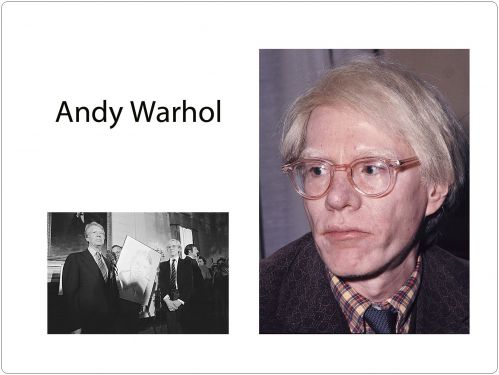 Andy Warhol was born in Pittsburgh on August 6, 1928, at the registry office Andrew Warhol jr. he was one of the leading exponents of Pop Art and one of the most important artists of the twentieth century.

American painter, screenwriter, sculptor, producer, director of photography, editor, director and actor, Andy Warhol showed his talent from an early age and after graduating from the Carnegie Institute of Technology he established himself in the world of advertising, working with well-known magazines such as Glamour and Vogue.

Despite surviving the shooting that involved him and his partner on June 3, 1968, Andy died young at the age of 58, following a gall bladder operation (February 22, 1987) and later his works have reached an unprecedented reputation, so as to become the best-selling artist in the world after Picasso.

Thanks to the screen-printing system, the artist produced his works in series and his most famous works have become icons. It was precisely repetition that led to his success, as well as his ideology that distinguished him on the international art scene, that is, the fact that he believed that art should be consumed. In fact, his works were not only found in museums or at exhibitions around the world, but also on supermarket shelves, in shops, on billboards, etc.

For the artist, mass products represented social democracy, he believed that everyone had the right to consume the same Coca-Cola that Elizabeth Taylor or Jimmy Carter drank and in fact he created this possibility through his works.

Andy Warhol's portraits of famous people from all over the world, from Princess Diana, Marilyn Monroe and Che Guevara to the former Empress of Iran Farah Pahlavi, are also famous, but his art touched every sector, from cinema to advertising and soon his works became a way for others to assert their social status. In fact, getting portrayed by the artist had become a fashion, a way to assert oneself and there are many famous people who can claim they have been portrayed by Andy Warhol.

Unforgettable is his work of art called "32 Campbell's Soup Cans" which includes 32 canvases in synthetic polymer on canvas, 51 x 41 cm large, representing all types of Campbell soup that were then marketed in the States. Currently this work is considered one of his most representative and can be visited at the MoMA (Museum of Modern Art) in New York.

While in America his art was much appreciated, in Europe only in recent years the works of Andy Warhol have been accepted for what they really are. In fact, while the artist was successful in the States, in Europe many people believed that his works were a form of subversive and even Marxist satire of American capitalism, but also a form of Marxist criticism of pop culture.

In any case, today his masterpieces are appreciated all over the world.