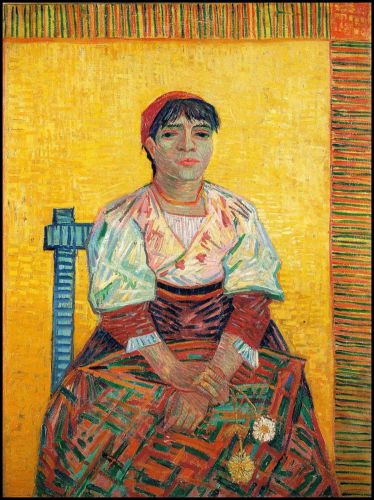 Not only that, the Italian model is also famous for being the owner of the Café du Tambourin in Paris.

The fame of Agostina Segatori

There is no news about Agostina Segatori's childhood and teenage, as she becomes well known since she begins posing in 1860, in Paris. The first to choose her as a model is Manet, then she poses for Jean-Baptiste Corot and then, in 1873, she meets the Parisian painter Edward Dantan with whom she begins a stormy relationship that lasts until 1884. During this relationship, she also has a child with the painter.

As mentioned, Agostina also owns the Café du Tambourin, located at 62 Boulevard de Clichy in Paris. Apparently, it is precisely here that Van Gogh meets her.

The relationship between Vincent Van Gogh and Agostina Segatori

During Van Gogh's stay in Paris, the painter therefore meets the Italian model and, according to what emerges, they have a relationship in the spring of 1887. During his time in Paris, there is little correspondence between Van Gogh and the model, as Vincent lives with his brother Theo, but the Dutch painter nevertheless names the woman in two letters.

Not only that, but the painter Émile Bernard, a close friend of Van Gogh, in an article talks about the relationship between the Dutch artist and Agostina Segatori. Apparently the two are particularly close and Van Gogh, in addition to making two portraits of her, also makes several oil nudes in which the woman is represented. In addition, it is Segatori herself who organises the first exhibition at her place in which Van Gogh exhibits several of works, masterpieces that the woman keeps after the consensual separation from the artist in 1887.

The woman then faces various financial problems, loses her café and dies shortly afterwards in 1910.

The most important portraits of Agostina Segatori

Among the most famous works in which we find the Italian model portrayed, there is Manet's masterpiece entitled "Agostina, l'italienne", dated 1866. Currently, this work by Manet is part of a private collection and is located in New York.

Another important portrait is made by Van Gogh himself in 1887 and is entitled "L'italiana", a work that is nowadays preserved in Paris at the Musée d'Orsay, a work made using a technique inspired by Japanese prints but adapted to the very personal style of the Dutch painter. The other portrait, "Donna al Cafè Le Tambourin", in which the model is seated at one of the tables of her Café, is now kept in the Van Gogh Museum in Amsterdam, where in total you can admire more than 200 masterpieces created by the Dutch painter.