The love story between Renoir and Aline, his muse 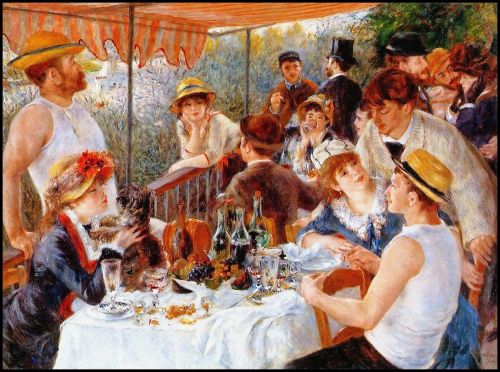 Carefree, harmony and joy of living are the main features of the works of Pierre Auguste Renoir and they perfectly reflect the life led by the French artist, a full life, in which despite the economic difficulties experienced in adulthood, the painter has never lost his enthusiasm.

A lover of beautiful women and evenings with friends (including various Impressionists), Renoir has had several lovers in his life, but only one of his muses has managed to make him fall in love: Aline Victorine Charigot, a beautiful and sweet girl with red hair and an upward nose who worked as a tailor at a workshop in Montmartre and who was 22 years old when she met Pierre Auguste Renoir, 38 years old.

Although the artist was almost twice her age and he was a well-known womanizer, poor and prone to various vices, Aline falls in love with the impressionist artist and becomes first his lover and then his wife. Together they will have three children, the first had before their marriage and one of them become a famous director; although Renoir is in love with his wife, he continues to have several lovers even after marrying Aline, actions that will have consequences for the artist.

Aline appears in many paintings: "Luncheon of the Boating Party", set at the restaurant "La Fournaise" where Renoir and Aline spent their summer afternoons, a painting in which the woman is holding a dog in her arms; she appears in the work "The large bathers", "Oarsmen at Chatou", etc.

As mentioned above, Pierre Auguste Renoir, despite being in love with his wife, was not a model husband and during his marriage with Aline there was no lack of betrayals by the artist and, according to some biographical books Aline, tired and disappointed by her husband's adventures, after twenty-five years of relationship, decides to separate from Pierre Auguste, it seems after the umpteenth infidelity of her husband, especially after the relationship that the artist had with the French painter Suzanne Valandon. Aline died in 1915, while the Impressionist artist died four years later, consumed by rheumatoid arthritis and a complication caused by pneumonia.

Beautiful, sunny, simple but at the same time endowed with a natural elegance, Aline was the love of Renoir's life, although 15 years before meeting her the French artist had a relationship with Lise Trehot, who was the cousin of a friend of his and who also became Renoir's favourite model, in fact she appears in 20 paintings made by the artist. Although they were inseparable, when Renoir was called to arms, she put an end to their relationship and married an architect. It was later that the painter met the beautiful Aline, the woman who with her simplicity won Renoir's heart and who would become her life partner almost until her death.

Able to love life at all times, full of initiative, cheerful and a lover of beauty, Renoir is one of the most important Impressionist artists and his works are invaluable.