Marc Chagall: known aspects of the life of the Russian painter and sculptor 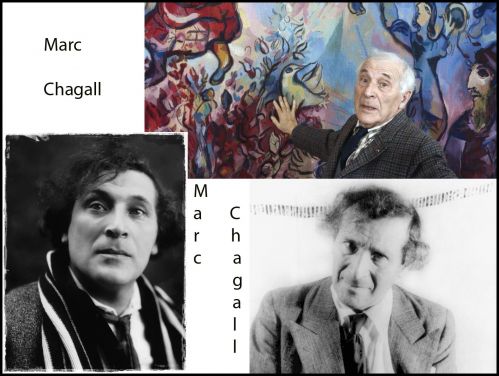 Born in Russia in 1887, Marc Chagall was a French naturalized painter and sculptor, considered a narrator suspended between the fairy-tale and the real. In his numerous paintings, human figures, landscapes and animals blend with evangelical and biblical themes; his masterpieces are housed in the most prestigious museums around the world, such as the Guggenheim in New York and the Pompidou Centre in Paris. However, although he is a well-known painter, there are some interesting facts about Marc Chagall that few people know:

His real name was not Chagall

Chagall was Jewish and although everyone knows the painter with his name in French, in fact being Jewish he was called Moishe Segal, while in Russian he was called Mark Zacharovič Šagalov, which abbreviated to Šagal.

He was one of the longest-lived painters

Marc Chagall lived until the age of 97 and painted for about 80 years, in fact we do not know the exact number of his works.

During the First World War, Marc Chagall was forced to leave Paris and travel to Berlin. On his return, in the house where he lived and where he kept about 150 works, he found a refugee and no painting.

He suffered from depression

After the death of his wife following a viral infection, Marc Chagall went through a period of depression for several years and no longer painted for about 9 months.

Although the two artists painted in different styles and there was a certain esteem between the two, they were never friends and often from their relationship a certain rivalry arose.

When Bella Chagall died, his daughter Ida hired a housekeeper for Marc, a woman named Virginia who was 28 years younger than the artist and with whom Chagall had a relationship that he initially kept hidden. He also had a son with this woman, but the relationship ended after a few years and Virginia went to live with her lover, a photographer she had met in New York. Later, her daughter Ida hired a secretary for her father, Valentina Brodsky and Chagall, although the woman was 25 years younger than him, married her in 1952.

He was arrested in St. Petersburg

During the time when Marc Chagall was studying art in St. Petersburg he was arrested, as at the time Jews could only stay in the city for a short period and had to have a special permit. During the week of his imprisonment Marc devoted himself to painting.

He was a very vain person

In his autobiography Marc Chagall states that he used to spend a lot of time in front of the mirror, that he often made up his eyes and even his lips, and also that he loved to walk around naked in his studio.

A controversial character, Marc Chagall died in 1985 at his home in Saint-Paul-de-Vence, where he had moved in 1966.