"Luncheon of the Boating Party": one of Renoir's most interesting paintings 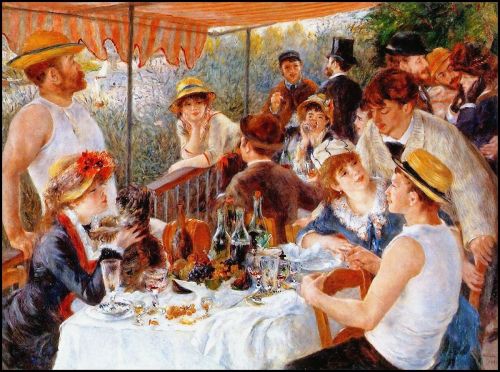 There are many famous paintings that the French artist left us, but among them "Luncheon of the Boating Party" is the one that manages to involve the observer the most. While admiring this work, one seems to be able to perceive the laughter of the subjects, the scents from the tables, the dialogues of the people, the warmth of the beautiful day that enveloped the customers of the restaurant, etc.

Made in 1881, this famous painting by Pierre Auguste Renoir was created by the artist while in a small village along the Seine. Preserved in the Philips Collection of Washington, the painting depicts a common scene, a moment in everyday life when rowers dine together with friends and acquaintances.

Renoir has always been a lover of daily scenes, which he portrayed in Parisian cafés and parks. In this case, Renoir leaves the big city and portrays a fleeting scene which, thanks to his technique and skill, is immortal. Through this painting we can learn about the habits of the French of that time, their taste in food, the fashion that characterized those times, hobbies, etc.

"Luncheon of the Boating Party" is therefore a painting that we can consider similar to a photograph, a painting that portrays a memory, that immortalizes a scene from everyday life.

It is well known that many impressionists, after the invention of photography, were inspired by the techniques that allowed them to photograph moments of life; probably, Pierre Auguste Renoir was inspired by photography when he made this masterpiece. In fact, observing the painting one can perceive the artist's desire to stop fleeting moments. The brushstrokes become shorter and faster, the colours take the place of the contours and the study of light and its reflections replaces the analysis of proportions.

Why Renoir chose this location

As anticipated, this painting was made in a small village along the Seine. Precisely, a small village on the island of Chatou, where there was the Fournaise restaurant, a small meeting place for rowers that used to be a simple boat rental. Built by the carpenter Alphonse Fournaise in 1857, after the first years of activity the rental turned into a restaurant and small hotel that housed the rowers and not only. Renoir also loved to spend his days here, together with his beloved Aline.

The people in the picture

There are 14 subjects painted by Pierre Auguste Renoir, friends of the painter and his companion Aline, who is playing with a little dog.

This is Renoir's last work before he left for Italy, where he made several changes to his pictorial technique.