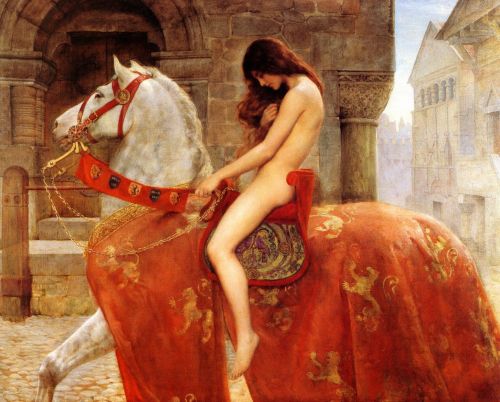 Lady Godiva is a work by John Collier dated 1898, it is painted in oil and is linked to the pre-Raphaelite period.

We find ourselves in front of a female subject which is recurrent in art: Lady Godiva is part of an English legend that saw this noblewoman as the protagonist who asked her husband to reduce taxes to the population and the latter refused saying that he would do it only if she had paraded naked throughout the city; she did it even though shortly before her appearance in public, it came out a poster inviting the population to remain locked in the house on the appointed day.

In my opinion in this work, Lady Godiva is not treated as she used to be when this legend was portrayed: in fact, the Lady does not have a solemn attitude, but more delicate and composed, in fact at a technical level the contours of the body are blurred and make the protagonist of the scene delicate and fragile; for this reason we see, more than a solemn revenge of the woman at that time, a sort of awareness of the author and the same lady who realizes that a woman must even get to mock herself in front of the people to assert herself and to be taken seriously.

We find always delicate colours that go from red, to gold, to water green and to blue, the latter finally dedicated to the painted house that appears on the right, which is almost surreal thanks to transparency. The delicate application of the colours and the transparency of some objects in the background (given by the perfect use of oil colours) bring us into a sort of fairy-tale atmosphere that gives so much to the final rendering of the work.

Finally, I think it's fantastic how, despite the position of the woman with a curved back and with a bent and sad face (as if she were going to the gallows), we do not think of a mocked and defeated girl, but of a very brave woman who decides to surrender to her husband so that her people can survive.