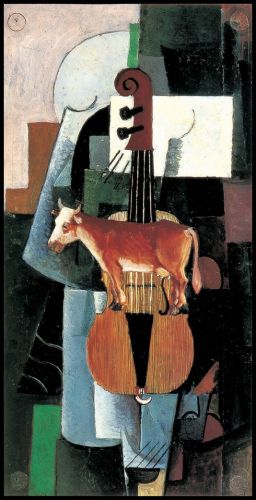 Born in Kiev on 23 February 1878, Kazimir Malevich was a painter considered one of the pioneers of geometric abstractionism, as well as of Russian avant-garde art. After studying in Moscow at the private Academy of Reberg, the artist founded the avant-garde called Suprematism, oriented towards absolute plastic sensitivity.

After his debut as a symbolist and after deepening his knowledge of Neo-Impressionism, Kazimir focused on the development of the Cubo-Futurist movement.

At an international level, Malevich is considered a fundamental part of the pioneering triad that made an important contribution to the opening of the new avenues of art that characterized the twentieth century. While Picasso was the one who gave important meaning to figurative art and Duchamp to conceptual art, Kazimir Malevich was one of the main exponents of abstract art.

The artist defined Suprematism as the purest form of sensitivity in art. According to the suprematists, the external appearances of the things that are in nature are not able to offer interest, but only sensitivity is truly essential. In practice, according to the vision of the suprematists, an object in itself represents nothing, and art is pure expression, without any representation.

In 1913, together with other artists, Malevich drew up the Manifesto of the First Futurist Congress. During this period the artist created several important works, such as "Cow and the Violin", work done in 1913 and "Composition with the Mona Lisa" which dates back to 1914, etc.

Later, the artist explored Suprematism, a current that would influence and find application not only in painting, but also in design, modelling and architecture.

But it was the 1920s that represented the greatest theoretical explosion of Malevich's concepts, and it was during this period that the artist decided to abandon the classic and ruffled brush to give space to the sharpened pen. He devoted a lot of time to notes, writings and drawings and it was during this period that he carried out a very advanced research on Suprematism.

This was followed by exhibitions of his paintings, first in Warsaw, then in Berlin, at the Grosse Berliner Kunstausstellung. When he was in Germany, he met Jean Arp, Naum Gabo, Le Corbusier and Kurt Schwitters.

In 1929 a personal exhibition of Malevich was held in Moscow, but because of his relations with German artists, not appreciated by the regime, in 1930 the painter was arrested and unfortunately most of his notes of this period were destroyed. During the last years of his life, he painted in the figurative style. Kazimir Malevich died on 15 May 1935 in Leningrad.

Of Polish origin, Malevich was a painter who left his mark on the art world of the 20th century. Unfortunately, many drawings, writings and notes were lost, and others were found late and have not yet been translated, but Kazimir Malevich, despite the problems he encountered when he returned to Russia, still managed to amaze the world with his long-studied theories. Finally, one cannot forget his extreme sensitivity that he applied in his art.