Henri Rousseau, the customs officer who was an artist 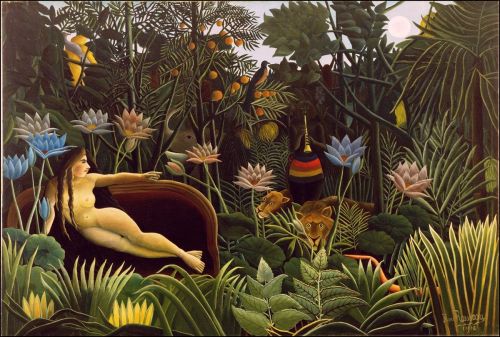 Without any doubt, tenacity was the main characteristic of Henri Rousseau, the forerunner of Art Naif. Despite his humble origins and a thousand difficulties, this painter managed to make his way among his colleagues and he was one of the first to create dreamlike works at a time when critics were struggling to accept and appreciate even the works of the Impressionists.

The life of Henri Rousseau

Henri Rousseau did not enter the art history books as a rich, highly cultured artist, appreciated by his colleagues and neither for an exemplary academic education. Quite the contrary. He was not wealthy, he had not followed academic studies and before giving himself completely to art, he used to work as a customs officer.

At the registry office as Henri Julien Félix Rousseau, also known as "The Customs Officer", Henri Rousseau was a French painter born in 1844, considered today to be the forerunner of Art Naif, an artistic movement completely disconnected from social and cultural reality.

We are talking about a self-taught artist who managed to exhibit his works for the first time in 1886, at the age of 42. Poor, often mocked not only by critics, but also by his colleagues who considered him an amateur with little talent, Rousseau held his first exhibition at the Salon des Indépendants in Paris, a Salon born in 1884 as opposed to the Salon Officiel where artists could only exhibit after passing a test and a jury's approval.

Although at the Salon des Indépendants several artists exhibited, artists who loved to express themselves freely through their art without necessarily taking academic rules into account, Henri Rousseau's first exhibition was not a success. His works were harshly criticized because they did not faithfully represent reality as it was "required" at the time and he was mocked for his technique considered too crude and childish.

The pictorial style of Henri Rousseau

We are therefore talking about a completely different style from those used by his colleagues, difficult for the critics of the time to understand. However, in 1910, when he exhibited "The Dream", his best-known work, he amazed everyone at the Salon des Indépentands. This work fully represents the painter's style, it manages to involve and fascinate the viewer thanks to the characters represented and the setting that seems to take the viewer on a surreal journey.

The problems with the law and the encounter with Picasso

Rousseau continued to work as a customs officer until 1893, although he had a great talent for painting and, once he left his job, since he was not very successful as a painter, he gave violin lessons to survive till the end of the month. Not only that, in 1907 the artist had also been involved in a bank fraud case and for this reason he ended up in prison.

As you can see, Henri Rousseau had a rather troubled and unfortunate life, but if we know his works today, it is also partly due to the encounter of the French artist with Picasso, who had discovered by chance one of Rousseau's works and he included the French painter in the circle of the most prominent artists of the time.

Today, Henri Rousseau's paintings are kept in the most important museums in the world: Musée d'Orsay in Paris, Museum of Modern Art in New York, etc.