Albrecht Dürer, the revolutionary of the German art world 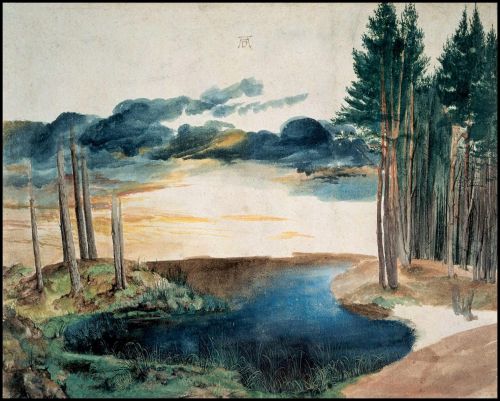 Born on May 21, 1471 in Nuremberg, Germany, Albrecht Dürer was one of the greatest artists of all time. Engraver, painter, treatise writer and mathematician, Dürer was one of the major protagonists of the Renaissance and once he arrived Venice, he approached the Neoplatonic circles.

The German painter, who was both enthusiastic and pleased with his success and dissatisfied and melancholic, never ceased to show his perennial desire to understand and see in order to get to know, and that is why he travelled constantly.

The beginning of his career as an engraver and painter

Born into a family of craftsmen, Albrecht Dürer is the third of 18 children, but unlike many of his brothers, Albrecht does not follow in the footsteps of his father, who was a highly esteemed goldsmith. His talent has been noticed ever since he was a child and at the age of 15 his father decides to entrust the young man to the painter Michael Wolgemut.

It is in Wolgemut's workshop that Dürer approaches the art of engraving, as that shop was one of the most important in Nuremberg, where the technique of woodcut was used. It is not certain whether the artist is really passionate about engraving from a young age or whether there were economic reasons behind his commitment, but the fact remains that the engraving techniques he learns during this period will become a fixed point in the life of the German artist. He considers engraving a form of art in its own right and his studies and experiments in this field will lead him to be one of the best and most important engravers of ancient prints, at the level of Rembrandt and Goya.

In the meantime, the young artist attends the high society of Nuremberg and at the age of 23 he marries Agnes Frey, daughter of a goldsmith. Also, during this period of his life, Frederick of Saxony, who loves the works of Albrecht Dürer, commissions several works to the artist and this contributes greatly to the success and fame of the German painter and engraver.

From an early age he shows interest in travelling and in 1495 Albrecht makes his first journey to Italy, interested in the masterpieces of Italian Renaissance masters: Leonardo, Giotto, Raphael, etc. Ten years later, he returns once again to Italy and these experiences greatly affect the maturation of his style: he pays the utmost attention to detail, the figures are defined thanks to psychological introspection and each work is created by creating a perfect harmony between the landscape and the figure portrayed.

The last years of his life

Cultured and prepared, at the death of his father the artist takes over the reins of the goldsmith's workshop, while continuing to devote himself to his painting works and beyond. In the last years of his life, influenced by the Lutheran Reformation and by the peasant revolt, despite having achieved great success even at European level, the artist decides to abandon painting to devote himself to didactic treatises.